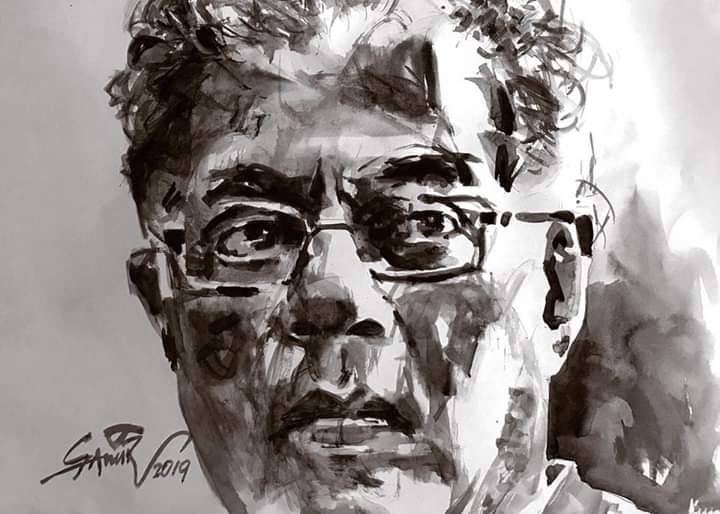 The most telling image is of this towering intellectual holding up a poster of him being an Urban Naxal too! Protesting the arrests of the innocent Social workers and intellectuals. At the meeting pushing for an enquiry after Gauri Lankesh’s murder he looked more saddened by the circumstances than his own state with tubes inserted in his nostrils.

It’s difficult to imagine this intellectual who bridged the North & the South, this polymath who created his stamp on Indian Theatre, Cinema and modern thinking – as not being there anymore.

As a Rhodes Scholar, he excelled at his studies at Oxford and was also elected as the Student Union President. That was a year before his play ‘Tughlaq’ was written in ’64. Along with Yayati, written before this based on a tale from the Mahabharata had now established the arrival of the Indian Playwright at just 26 years. Badal Sarkar in Bengal, Tendulkar in Maharashtra and Mohan Rakesh in Delhi along with Karnad were to foment the modern Indian Theatre.

Girish for his part always believed in examining the Past to get a handle on the present. He found a new approach drawing from historical and mythological sources to tackle contemporary themes. Yayati, his first play uses myth to examine the  existentialist crisis of modern man through characters locked in psychological and philosophical conflicts. His next Tughlaq (1964), about the rashly idealist 14th-century Sultan of Delhi, Muhammad bin Tughluq, an allegory on the Nehruvian era which started with ambitious idealism and ended up in disillusionment. His plays have been performed and premiered all over the globe. The Deutsches Theatre,Minneapolis Theatre… the list goes on.

Karnad made his acting as well as screenwriting debut in the Kannada movie, Samskara (1970), based on a novel by U.R. Ananthamurthy and directed by Pattabhirama Reddy. That movie won the first President’s Golden Lotus Award for Kannada cinema. He was the young collaborating writer with the Director. His first Directorial venture with the Kannada film Vamsavriksha for which he got the National Award for Direction.

Directing him in ’96 for a serial ‘In the footsteps of the Gautama’ in Rajgir, I was awed, unsure of how I would direct him. I had already mailed him the script. We met and he said he wanted to discuss some of the ideas in the script. I went expecting the worst. Ears reddened. He put me at ease with wondering who had written the script and praised it. We chatted about Theatre, Films, Buddhism his childhood and the habit of long walks. The five days we spent together in the location where the Gautama would come with his loyal band of followers every monsoon and where the movement was to finally get a Monastery and the Order a shelter away from the elements. The Gautama was saddened, as was I. We had the last shot at Nalanda and Girish had to leave to catch his flight from Patna. He came upto me and told me how much he enjoyed the shoot and our conversations.

Girish Karnad is no more. But his legacy will endure. And inspire every liberal Indian. Ever an unequivocal critic of majoritarian politics and building on hatred. Courtesy: Samir Mondal. By kind permission of the artist.

Avijit Dutt is an Indian filmmaker, actor, theater director and communications consultant. An actor, director and playwright, Dutt has more than 75 plays to his credit, while also appearing in several critically acclaimed films like Fire, No One Killed Jessica, Madras Cafe and The Second Best Exotic Marigold Hotel to name a few. Dutt is also, in all probability, the only actor to hold two patents – including a toilet. His organisation, Enable, builds toilets and helps in hygiene and sanitation issues in rural India.

4 thoughts on “A Legend Passes Away. A Legacy Remains. Forever.”