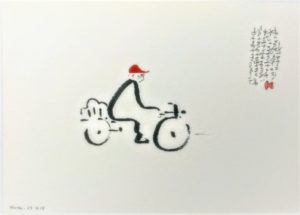 Describing, or introducing Hiran Mitra to the new world is easy. He is the complete creative genius many of us have known in the past 45 years (that’s the time span that I have known him, worked with him, went through various professional crises, was the solitary friend who sipped tea outside the Nursing Home when Anita di was in labour). To singularly point out Hiran Mitra, aka Stalin da as a painter, illustrator, advertising designer, cinema poster designer, author, art historian, film and theatre set designer, book cover designer, magazine cover designer, experimentor, Barnographer….We stop! Last October, Stalin da made a trip to Japan and I used my Long Association card to let Art Pickles present his Japan visit, his very own Japan Jatri’r Diary*, with a small note and a few sketches. We are delighted to upload** them on our various platforms.

Hope you also enjoy them.

Here are some of his illustrations

Note : The original work is the property of Hiran Mitra and his designated agent(s). We have only reproduced them with his kind permission. This post is of no commercial value