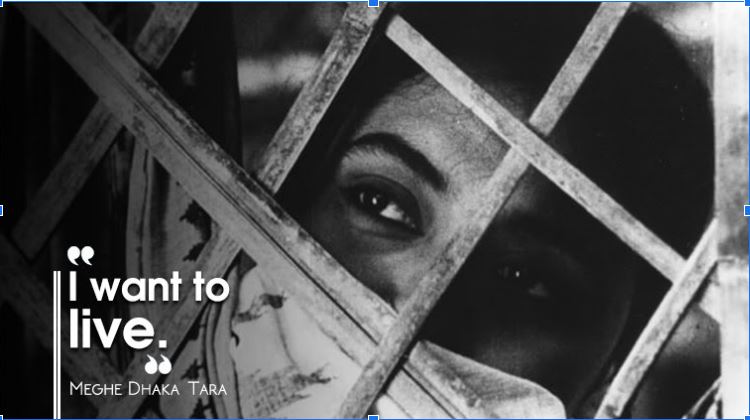 Not many people know that Ritwik Ghatak, the maverick genius as Chitto Ghosh calls him, was an Assistant Director to Nemai Ghosh, the Cinematographer/Director who made the first-ever film based on the Partition of India, Chinnamul. The film made in 1950 addresses the dislocation of the masses from their roots, farmers who had to migrate to Kolkata, to an environment so alien to their land. Though the film was not a commercial success, it was much appreciated by V I Pudovkin, the great Russian director who was in Kolkata when the film was released and took home a print to screen it in Russia. The film, however, made the director move to Chennai and work as a cinematographer and directed just one more film, that too in Tamil.

The other film on Partition of Bengal released was Salil Sen’s Natun Ehudi (1953). It was about how the transformation of the refugees from their starting point on the platform of Sealdah station to adapting themselves to all kinds of misery and pain.

We must acknowledge here that Indian cinema had a history of films based on Marxist thinking. Nitin Basu’s President (1936) was made on trade unionism, in 1937 he followed it up with a film on the farmers’ cooperative, titled Dharti Mata. Surprisingly, the issues of the working class were taken up by the Hindi film industry more than the Bengali cinema, particularly by K A Abbas. In 1941, Abbas made Naya Sansar and later, adapted Bijon Bhattacharya’s landmark play Nabbana into Dharti Ke Lal (1949). Chetan Anand adapted Gorky’s Lower Depths into Neecha Nagar and Bimal Roy went on to make Do Bigha Zamin based on a story by Salil Chaudhury in 1953. The influence of IPTA was palpable.

Ghatak, who was much involved with IPTA and the Communist Party of India, went on to make films and in between  1960 and 1962, he made three films centering around the partition. Meghey Dhaka Tara (1960), Komal Gandhar (1961) and Subarnarekha (1962) However, before getting into discussing the Partition Trilogy by Ghatak,we must take a look at his background. He was born in Dhaka and  had an inborn connection with the banks of Padma. Naturally, he was familiar with the sounds of the river and waterways, and many of such sounds and images were transferred onto his films. “ So many sounds, so many pictures, so much emotion,” he had once recalled.

He moved to Baharampur and then to Kolkata and joined the IPTA and was a card holding member of the Communist Party of India. He continued to dabble with Marxism and it was evident in all his films. After his involvement with Chinnamul,  Ghatak made Nagarik in 1952, a film centering around the working class, and even though it showed up his promise, it had technical faults and was not commercially released in his lifetime.

However, he had made bold statements about his preoccupation with the Partition of Bengal. Even though Bengali cinema had established Indian cinema on the international platform, many Bengali artists were still languishing from the pain of the partition. A large number of the populace were shifting from one refugee camp to another, carrying with them the tag of being a Refugee. Even if they were able to establish an economic foothold, it was getting difficult for them to adapt to the new socio-cultural order.

Ghatak was perhaps the first among them to raise these issues upfront.

In all the three films, considered the Partition Trilogy, Ghatak shared with the audience his rage, frustration and the sense of loss due to the Partition. Meghey Dhaka Tara perhaps still remains his most discussed film even till date. The closing dialogue, Dada ami banchtey chai is still considered iconic, symbolising hope. The Partition haunted him all his life as did the subject of refugees. He identified himself with the pain and anguish of refugees who lost their entity and had to readjust in the alien environment. In his book, Cinema and I, Ghatak had said: “Cinema, to me, is a means of expressing my anger at the sorrows and sufferings of my people”

Dealing alongside the tragic dimension of partition and refugees, there was an element of stark reality in all the films on the partition. He had dealt with human relationships, the Bengali obsession with the mother figure of divinity and the sense of loss caused due to partition. The loss of the roots and how the post-partition situation corrupts people, turning them into exploiters, coping with the filth of the city life — far from their pristine world remains underlined in all his films.

In 1973, Ghatak did go back to erstwhile East Bengal, the land he loved and missed to shoot Titas Ekti Nadir Naam, trying to capture the memories and ethos he had left behind. However, it all failed him. He fell ill during the filming of the film, and had written, “…when I was making the film, it occurred to me that nothing of the past survives today, nothing can survive.”

It was after his death that Ghatak’s body of work made more waves than they did when he was alive. They have survived. With reassessment. And honour.