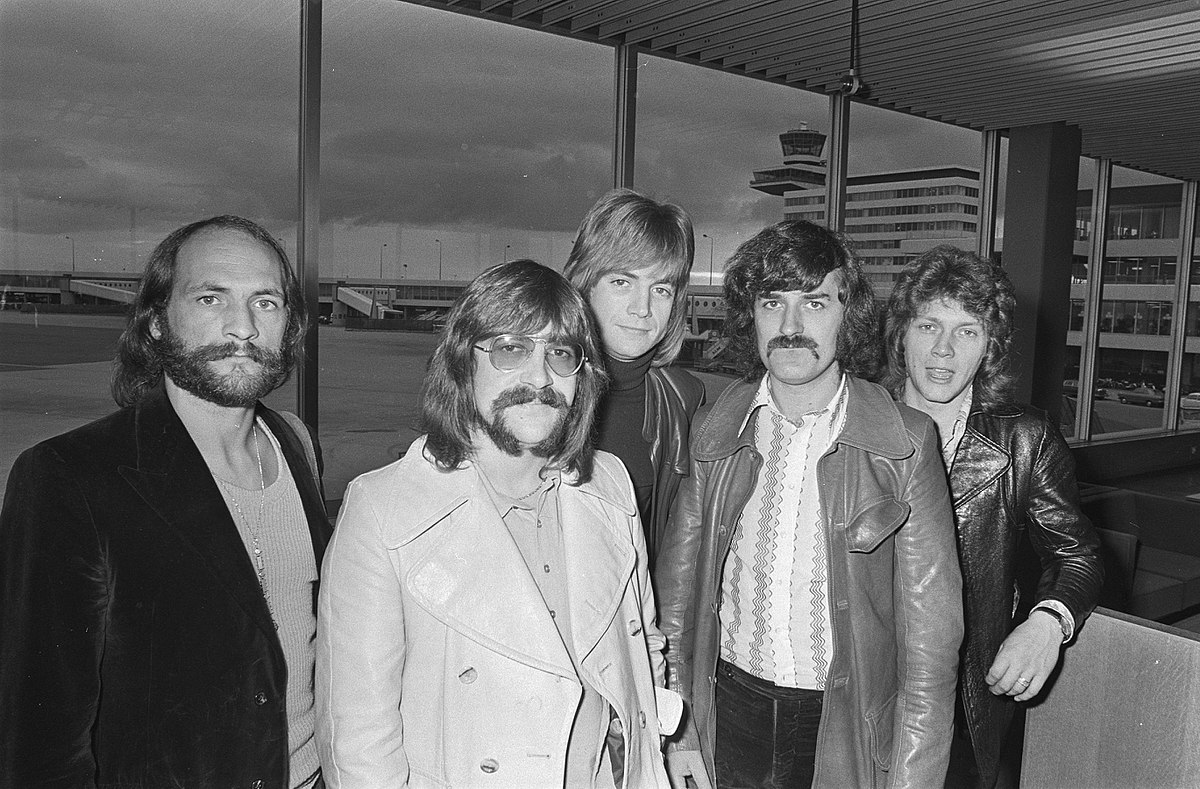 America – The home of rock & roll

The 1960s in America was all about anti-establishment youth movements and protests. This was the era of the Vietnam War with its attendant anti-war and  anti-draft protests, the civil rights movement, labour rights movement, feminist rights and reactions against the corporate rat race. A spin off of all this was also experiments in alternate living and looking inwards to unlock the unexplored potential of the mind. Rock music, forever a mirror to its social milieu, reflected all these trends on its home soil in America, more so after the British invasion of the early-60s had given it a new lease of life and the various strands, including the blues and blues rock of the British musicians, were merged in the various subgroups.

In the 50s, folk music was pioneered by musicians such as Woody Guthrie and Pete Seeger and usually had progressive social issues or labour politics for its theme.

By the early-60s, singer-songwriters like Joan Baez and Bob Dylan were spearheading this movement and Dylan had begun to reach a mainstream audience with hits including, “Blowin’ in the Wind” (1963) and “Masters of War” (1963), which brought “protest songs” to a wider public.

Soon, rock and folk music began to influence each other, but by and large remained largely separate, often with mutually exclusive audiences. Early attempts to combine elements of folk and rock included the Animals’, “House of the Rising Sun” (1964), which was the first commercially successful folk song to be recorded with rock and roll instrumentation.

The folk rock movement took off with ‘The Byrds’ recording of Dylan’s, “Mr.
Tambourine Man ”, which topped the charts in 1965. Later that year Dylan adopted electric instruments at the Newport Folk Festival, much to the outrage of many folk purists, with the first song of his set, “Maggie’s Farm”, followed by “Like a Rolling Stone”, which became a US hit single.

Folk rock particularly took off in California, where it led to acts like The Mamas & the Papas and Crosby, Stills & Nash to move to electric instrumentation, and in New York, where it spawned performers including The Lovin’ Spoonful and Simon & Garfunkel with the latter’s acoustic, “The Sound of Silence” being remixed with rock instruments to be the first of many hits.

Psychedelic rock first emerged in California’s music scene as groups followed the Byrds from folk to folk rock from 1965. LSD and psychedelia had already hit San Francisco and the leading musical proponents of it were The Grateful Dead, Country Joe and the Fish, The Great Society and Jefferson Airplane

Jefferson Airplane, which was later to evolve to Jefferson Starship, with its guitarist, Paul Kantner, and lead singer, Grace Slick, were an integral part of the San Francisco psychedelic music scene along with the Grateful Dead and were famous for their free concerts in the Golden Gate Park.

Psychedelic rock reached its peak in the late-60s as the ‘ The Summer of Love’ was prefaced by the  The Human Be-In event and reached its peak at the Monterey International Pop Music Festival. helping make major American stars of Jimi Hendrix and The Who, whose single “I Can See for Miles” delved into psychedelic territory.

Jimi Hendrix, with his band, the Jimi Hendrix Experience with two Englishmen — Mitch Mitchell on drums and Noel Redding on bass, burst on the rock horizon like a blazing comet, with Jimi’s unmatched lead guitar and molding the feedback from his amps as an integral part of his music, that no one had done before. Further he was the one musician, who though American, hit the London rock and roll scene and blew the minds of the English musicians before he became famous in America — a sort of a return match to the British Invasion of the States!

The other American psychedelic rock band was The Doors from the West Coast, formed in Los Angeles in 1965, with lead vocalist Jim Morrison, keyboardist Ray Manzarek, guitarist Robby Krieger, and drummer John Densmore.  All these trends climaxed in the Woodstock music festival in 1969 where all the major psychedelic bands performed.

In the early-60s, one of the most popular forms of rock and roll was Surf rock, which was mainly instrumental and with heavy use of reverb on the guitars, evoking surf and ocean imagery.

Most early surf bands were formed during this decade in the Southern California area. By the mid-60s, The Beach Boys , who used complex pop harmonies over a basic surf rock rhythm, had emerged as the dominant surf rock group and helped popularize the genre.

Blues rock actually took off in the US in the mid-60s, when American bands began to develop a sound similar to British blues and blues-rock musicians to whom they were exposed during the British invasion.

Key acts included Paul Butterfield (whose band, like Mayall’s Bluesbreakers in Britain, served as a starting point for many successful musicians); Canned Heat, the early Jefferson Airplane, Janis Joplin , Johnny Winter , The J. Geils Band and Jimi Hendrix with his power trios, The Jimi Hendrix Experience and Band of Gypsys— all were also a part of or experimented with this genre.

Blues rock bands, like  The Allman Brothers Band, Lynyrd Skynyrd and eventually, ZZ Top from the south of America, merged country elements in their music to produce a distinctive Southern rock sound.

Roots rock was a movement to get away from the excesses of the psychedelic scene and to a more basic form of rock and roll that brought back its original influences, particularly country and folk music and is also called country rock. In 1966 Bob Dylan spearheaded the movement when he went to Nashville to record the album, Blonde on Blonde. Other acts that followed the back-to-basics trend were the Canadian group, The Band, and the California-based Creedence Clearwater Revival, both of which mixed basic rock and roll with folk, country and blues, to be among the most successful and influential bands of the late-1960s.

The same movement saw the beginning of the careers of Californian solo artists like Ry Cooder, Bonnie Raitt and Lowell George, and influenced the work of established performers such as the Rolling Stones’ Beggar’s Banquet (1968) and the Beatles’ Let It Be (1970).

In 1968, Gram Parsons, a leading American musician and a great friend of Keith Richards of the Rolling Stones, recorded Safe at Home with the International Submarine Band, arguably the first true country rock album. Later that year he joined the Byrds for Sweetheart of the Rodeo (1968), generally considered one of the most influential recordings in country rock. However, Parsons soon left to be joined by another ex-Byrds member, Chris Hillman, in forming Flying Burrito Brothers, before Parsons departed to pursue a solo career.

The greatest commercial success for country rock came in the 1970s, with artists including the Doobie Brothers, Emmylou Harris, Linda Ronstadt and the Eagles — who emerged as one of the most successful rock acts of all time — producing albums that included Hotel California (1976).

Progressive rock was an attempt to move beyond established musical formulas by experimenting with different instruments, song types and forms. From the mid-1960s, The Beatles, The Rolling Stones and The Beach Boys, had pioneered the inclusion of harpsichords, wind and string sections — and even Indian instruments like the sitar and tabla in their recordings to produce a form of rock. An example of progressive rock can be heard in singles like Procol Harum’s, “A Whiter Shade of Pale” (1967), with its Bach-inspired introduction. The Moody Blues used a full orchestra on their album, Days of Future Passed(1967) and subsequently, created orchestral sounds with synthesisers.

At the end of the sixties, The Who’s Tommy  (1969) introduced the format of  rock operas and opened the door to “Concept albums”, usually telling an epic story or tackling a grand overarching theme. King Crimon’s’s 1969 debut album, In the Court of the Crimson King mixed powerful guitar riffs and mellotron with jazz and symphonic music, and is often taken as the key recording in progressive rock, helping the widespread adoption of the trend in the early-1970s among existing blues rock and psychedelic bands, as well as newly formed acts.

At the end of the 60s, in 1969, all the rock & roll subgroups exploded in a three day and night festival of music, peace and love, in Mr. Yasger’s farm in upstate New York — at the iconic Woodstock festival. The reverberations of which are still echoing today. Watch this space for that story soon!

Arjun Ghosh has been a respected advertising writer since the seventees and has worked with a number of big brand agencies and on big brands spanning over 45 years. Educated at St Xavier’s College, Kolkata and St Stephens, Delhi, he is a product of the ethos of the 60s and has authored a book, Six Years on the Dope Trail (Notion Press), recounting his travels and life in the sixtees and early seventees. He is considered one of the knowledgable few in the business of Rock, Pop and what have you.