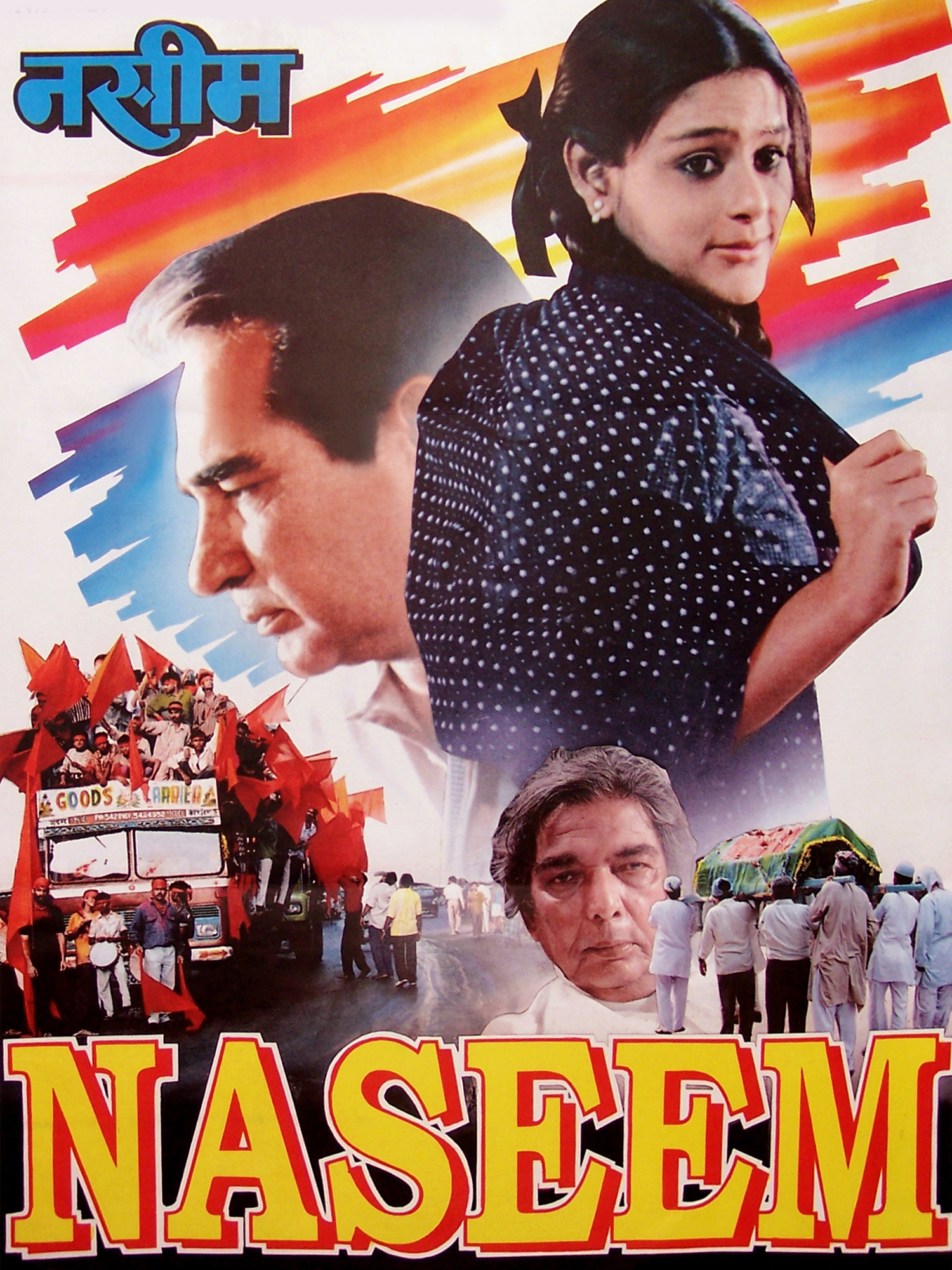 Set in 1992’s Bombay, Naseem (Mayuri Kango) is a young, school-going girl from a lower-middle-class Muslim family, full of life, bubbling with hope and enthusiasm – a little adolescent girl in every which way one can look upon her. Her doting grandfather (Kaifi Azmi) does her the most justice when he explains what her name – Naseem – means: the gentle morning breeze, one that is beautiful and energising, one that is calm and breath-taking. And that, in a nutshell, is our Naseem. She and her band of friends from school do everything that girls her age are supposed to do, which includes bunking school and going to watch a movie, while pretending to be aged ladies under their burkhas. A girl who is willing to take a little scolding and punishment from her loving parents (Kulbhushan Kharbanda and Surekha Sikri) for a certain Shahrukh Khan. A young girl who always makes it a point to drop by at the local grocery store to make simple small-talk with the Hindu shopkeeper’s daughter-bearing wife. Naseem is inquisitive, she is studious enough to get away with her studies and boisterous enough to be her elder brother’s worst nightmare. But what Naseem keeps missing out, trapped in her little bubble of the simple, innocent life she leads, is the societal fracture in the society she survives in. 1992 was a time of the country’s greatest political upheaval, with a Hindu majority hell-bent on making their presence and their so-called superiority felt on the minorities of the country. And when the battle lines are drawn sharply over a piece of land that both religious factions choose to call their own, society implodes.

And while the elders around her go into a tizzy about the uncertainties of their future, about the decisions of their past, Naseem finds solace in the innocuous stories told to her by her ailing grandfather, about his past, about his wife, about his friends – Hindu and Muslim – and about a time when identity belonged to Indians, not Hindu-Indians and Muslim-Indians. She finds solace in the simple tales of her grandfather getting into trouble with his wife, of trying desperately to do something for the cause of India’s independence, and of life in general.

And it is in this backdrop that Saeed Mirza scores perhaps the biggest trump card of the entire movie, when against the backdrop of frequent riots, Naseem’s father asks her grandfather why he continued living on in India, why didn’t he choose instead to go to the newly-formed Muslim state of Pakistan. And the answer is even more simple – it was because of a tree in their courtyard, a tree that Naseem’s grandmother was very fond of. They didn’t go anywhere else because they were already where they were supposed to be – at home.

And that is perhaps the underlying address that Mirza was trying to make with this movie. That there will always be strife, bloodshed, divides and destruction, and yet one does not leave home, one does not get agitated about everything that is happening around them. One perseveres, one stays where they are – because while times change, people live on. We live for the people around us, for the values we hold dear. We don’t escape. Instead, we wait patiently every morning for that gentle breeze to touch our face and make us whole once more, waiting impatiently for another day to take us wherever time intends to take us.

Naseem is another one of Saeed Mirza’s masterpieces, where he not only captures the story of his characters well, he does so with a certain elan, a certain amount of finesse. The setting of his characters is so perfect, so serene that one cannot help be transported into the world of Naseem and her grandfather, and live happily ensconced in the stories of the tired, yet benevolent old man, that we forget to realise how quickly the calendar was turning to that fateful December day when India took a test of her own conscience.

Kaifi Azmi can be found on his bed in every frame, except the very last, and yet it is his presence that makes Naseem the movie it is. Mayuri Kango does well too, her innocent young face telling the story a lot better than any words possibly could, and a supporting cast of extremely talented actors come in and out of their scenes doing just that much that was required of them. And like in all Saeed Mirza movies, the city of Bombay plays the most spectacular part of them all.

Naseem is a wonderful movie to watch, one that makes you ask several questions when the last scene passes you by.