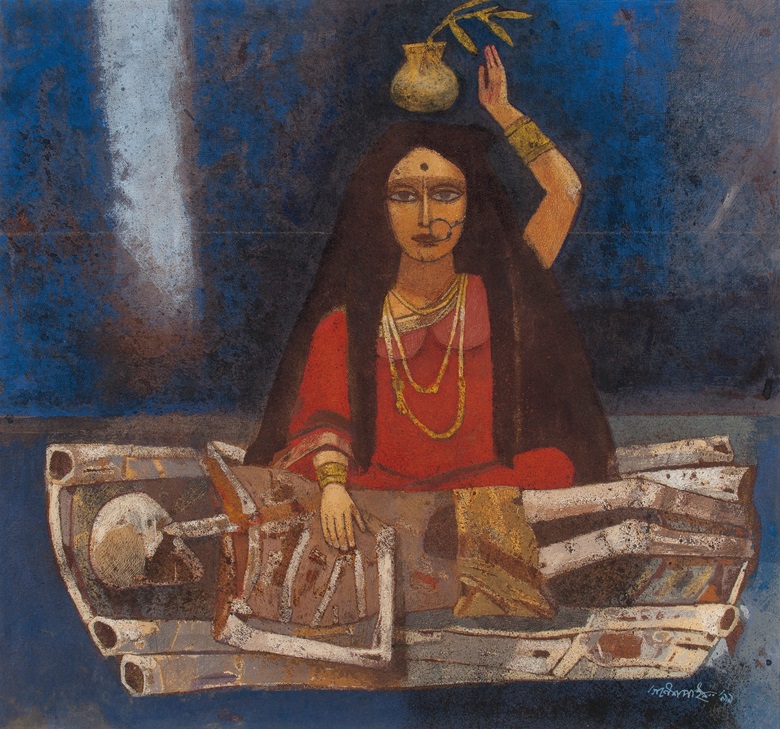 Contemporary art reinvents itself every moment and has evolved exponentially with creative extractions from popular art sources like folk art. The artist’s vivid use of color, use of space, and stroke portray a series of thought processes — these thoughts are sometimes poured onto the canvas in smooth pastel shades and sometimes they face challenges and hurdles to get into shape.

An inaccurate example of one of the challenges faced by an artist would be that of the revivalist Ravi Varma — from the bold post-impressionistic colors of Amrita Sher Gill in the 30s. Amrita guided her contemporary painters not only by her works but also through lectures and articles. All her paintings, especially those of women, have monotonous eyes, an expression of acceptance, and an innate element of depression; the challenges of the next decade came f through the ‘socially responsive’ work of the Calcutta Group The artists followed a pattern, most of them painted with modern representational or figurative styles like impressionism, expressionism, and post-expressionism. They brought refinement by the introduction of abstractionism, especially cubism. The artists found in their art a tinge of partial and later on, complete abstraction.

After independence in 1947, numerous art schools opened up. They had various means and tools to let the students enter the magical world of shapes and colors. Although the art in those times was somehow impacted by the western style, the themes of the artworks were always based on Indian images and culture.  A group of some of the most impactful artists of India, the Progressive Artists’ Group (PAG), was formed in 1947 in Bombay, seeking new ways to reflect India after independence. This group was dispersed in 1956, but it had already impacted Indian art to its maximum by then.

The 70s saw an intense turn towards social and political themes, primarily through figuration. The backdrop for this phase was formed by the 1971 war with Pakistan, famine, the Naxalite Movement in Bengal, and the imposition of an Emergency by the then Prime Minister Indira Gandhi. In the cities of Bombay, Calcutta, and Delhi, Tyeb Mehta, Rameshwar Broota, Gieve Patel, Somnath Hore, Ganesh Pyne, and Bikash Bhattacharjee, among others, felt that it is their responsibility to directly refer to the national situation and document the pain of the people through their artworks. Abstraction has been a part of our art ritual from the very beginning. This receptivity asserts itself in interior mindscapes conceived by S.H. Raza, Ram Kumar, and Gaitonde, and in Swaminathan’s return to the numinous space colour of Pahari painting. Retouching the Indian imprints are the artworks of magical realism, found in nocturnal adventures by Ganesh Pyne, subliminal desires by Jogen Chowdhury, and satirical barbs by Bhupen Khakkar and Atul Dodiya. Art is an ever-evolving theme and with the help of adobe software, procreate and NFTs, artists are creating and displaying their artworks constantly. But the bigger question is: over the years we have used different tools to reach out to the audience, however, have we reached all sections of people – the artwork that displays a lady catching fish as dawn hits her village  — has been shown to that lady? Is there any way she can recognize herself and say:

“I’m the muse of that painter…that artist!”