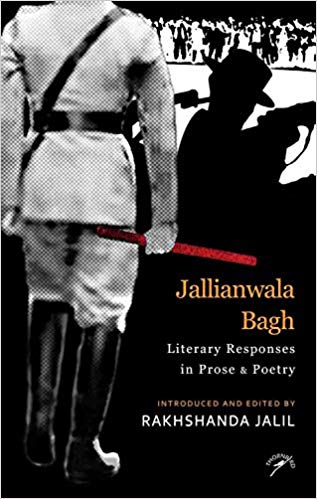 A review by Anushree Ghosh Art and literature have always been instrumental in awakening the unconscious souls, by reinforcing the spirit of existence and creating pits to bury the laws of establishment. The artists exhibit his emotions against fanaticism, bigotry, dictatorship, extortion and other acts of atrocities through their artworks or words. Therefore, words do not only pierce through the confined space, but they hit you hard where the wound never healed. Even the embalmed minds can be penetrated with revolutionary thoughts, if they are repeatedly beaten with the right points to ponder. A new anthology, Jallianwala Bagh: Literary Responses In Prose And Poetry, introduced and edited by Rakshanda Jalil is an amalgamation of literary voices in various forms that came from different parts of the country when Jallianwala Bagh massacre blanketed the earth with blood and corpses.

On 13th April 1919, Reginald Dyer, ordered his men to open fire at a gathering of thousands of people in Jallianwala Bagh. In an extract from ‘The Crown and the Loincloth’, Chaman Nahal tries to imagine the inner thoughts of Dyer, the preceding mind-set that led to the historical slaughter . Nahal writes — Dyer wanted to inflict pain on Indians who reminded him of the slimy things in “The Ancient Mariner” — their bodies ever-sweating with skinny limbs. The concoction of his personal hatred and national avenge gave him a reason to set score with the Indians at once. One man’s indignation caused the death of thousands of people, wounded many and left the survivors horrified for the rest of their lives. Dyer was still not satisfied, and he ordered that any passer-by of the street where a British lady was assaulted, must crawl through his/her stomach to reach the other end. The street had houses on both the sides and many of them didn’t have a backdoor entrance. This caused a lot of problems for the people who lived on the street—they couldn’t go out to even buy food or other necessary items. Jalil, a writer, critic and literary historian has compiled the responses of poets and writers who have tried to depict the demonic act using their words.  From Saadat Hasan Manto to others such as Bhisham Sahni, Nanak Singh, Sarojini Naidu, Mulk Raj Anand, and Krishan Chander, her accounts unfold the story from different perspectives. The characters pop out to wrap the incident around their daily routine; what could have been a regular day otherwise, turned into the worst recollection they can hold on to.

The protests that followed shattered the essence of the British government in India. Rabindranath Tagore returned his British Knighthood. The whole nation echoed in unison— “Inquilab Zindabab!”, the unrest scared the British and reminded them of the first War of Independence. The united roar frightened the so-called dummy government that looted this country of its wealth and left its citizens to suffer in pain and agony. It is the 100th year of Jallianwala Bagh massacre, but the true question is: do we still stand united as a nation against the wrong doings of the establishments? Do we have the freedom to use our words as instruments of destruction? And, as the progenies of such brave ancestors, do we have the guts to start a revolution?