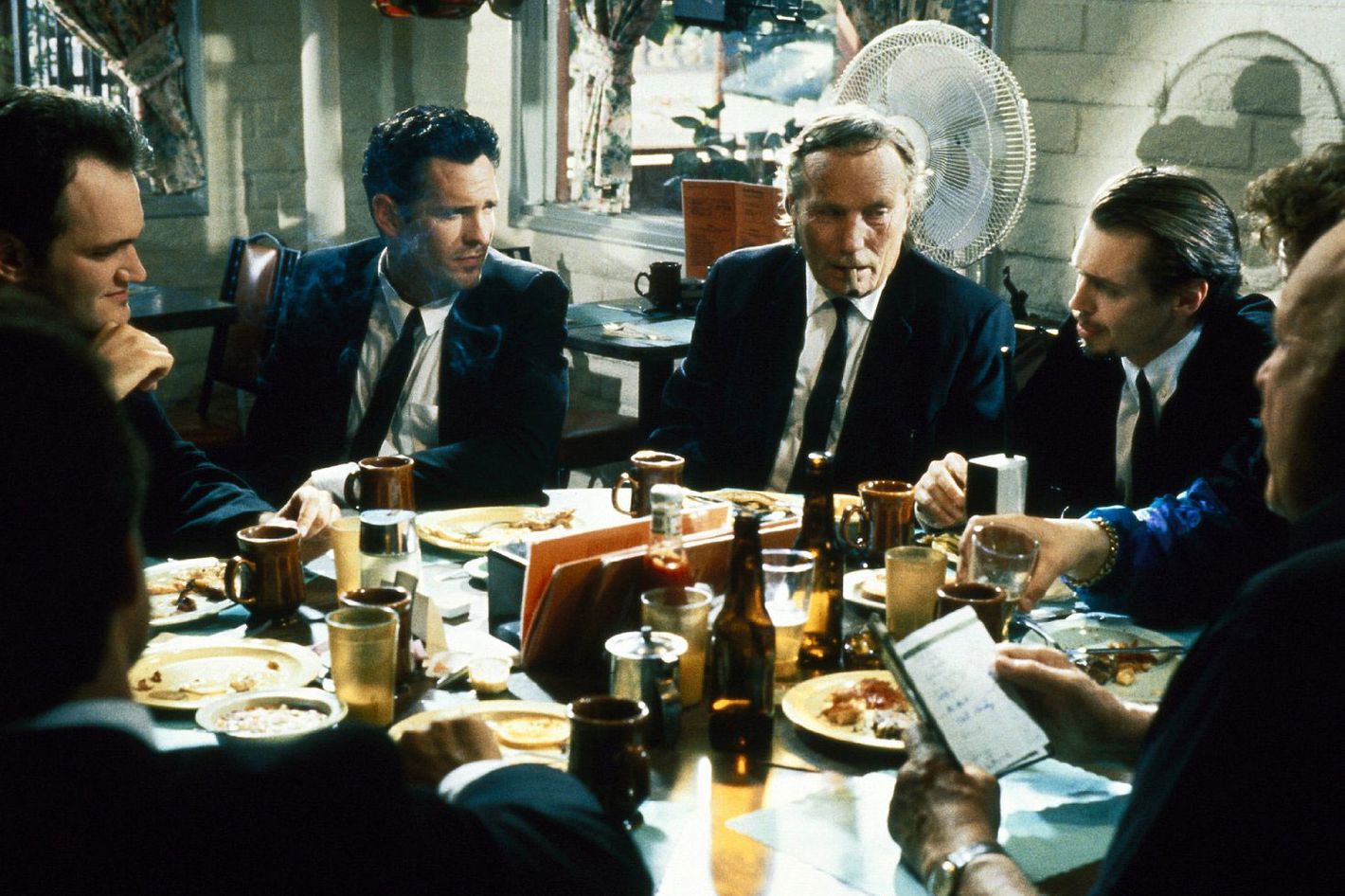 A rainbow of colours, and a dastardly plan.

But it all begins with an innocuous conversation at a diner that really goes nowhere as far as the central plot of the story is concerned. A group of men, sitting with their breakfasts at a plain Jane American diner, discussing the ethics of paying tips to waitresses for service provided – that is not how to expect a bank heist movie to start. And yet this conversation is perhaps the one that stays on the longest in the your head once the movie is done, one which is comic, poignant and absolutely delusional to the point of being ridiculous and you can’t help but have a mental duel with yourself as to the veracity of Mr Pink’s (Steve Buscemi) audacious claim – should you tip the waitress just because you feel sorry for what she makes in a week, or should you tip her because you truly are satisfied with the service that she provides you.

And once this entire opening sequence is behind you, the world’s coolest to-be bank robbers march out of there to what will forever remain one of the coolest, most sought after and most charismatic opening sequence of all time. Yes, breakfast is done and yes, they’re all off to rob a bank – but there’s no reason why they have to be all so drab and sinister about it. Style comes first, then comes the deed.

And the deed is something we never really get to see. Because seriously, was the bank robbery even integral to the plot? Did it really matter if they pulled off the heist or even got caught, for that matter? No, the actual intricacies of the event do not concern us viewers, what we need to commit ourselves to is what happens in the aftermath of it all. No sooner do the credit titles roll off, we find ourselves in a car with a frantic Mr White (Harvey Keitel) trying to rush off with a bleeding (and how) Mr Orange (Tim Roth) to their safehouse. There is blood everywhere in the back seat, there is a splaying and screaming Mr Orange who is distraught over the fact that he is indeed going to die in the next few seconds and there is a somewhat calm and composed Mr White trying to drive him away to safety, to medical help, repeatedly trying to calm him down by telling him he’ll be OK. The sight is gruesome and can stress absolutely anyone out.

But the madness only compounds further at the safehouse, as Mr White tries to figure out how to save Mr Orange’s life, when Mr Blonde (Michael Madsen) – the psycho of the lot – turns up, claiming someone amongst them was a traitor and had indeed tipped off the cops – else why on earth would the cops turn up during the heist, almost like they were waiting for them and kill so many of their other coloured cohorts? Mr Brown (Quentin Tarantino) was dead, Mr Blue (Edward Bunker) was dead, Joe Cabot (Lawrence Tierney) – the man who had masterminded the whole thing – was in the wind, trying to figure out a solution to the mess. And Mr Blonde wanted his answers. So he had dragged in the boot of his car, a cop he had somehow managed to gag and tie and now he brought the near half-dead cop back into the safehouse to interrogate and find the traitor amongst them. And when left alone with the cop and an almost faint, near-dead Mr Orange lying near them, Mr Blonde puts on some music, Stealers Wheel’s Stuck in the Middle With You (one of the strongest points of the entire film, btw) and goes off to very graphically chop his ear off. And then do some more to that lobbed off ear. Tarantino is not for the faint of heart.

Who was the traitor? Do they really share Mr Blonde’s theory? Or was it just a massive goof-up somewhere that led to their worst fears being realised?

Chilling scenes, mind-blowing music (all from the fictional radio station K-Billy) and a Mexican stand-off resulting in one of the most iconic climaxes to any movie in the history of celluloid, Reservoir Dogs will continue to be a watershed moment in the history of independent film-making. It announced to us the arrival of a man that would continue to take us by storm through the ears, with movies that scare, disturb and/or make you absolutely fall in love with the style. It made us revel in Tarantino’s style of “homage” to movies that have inspired him and stuck on with him through his adventures in cinema and it gave birth to a generation of storytellers who finally found a voice to their own ambitions, allowing them to confront their own style to a wider audience.

Reservoir Dogs is what we are stuck in the middle with. Forever.