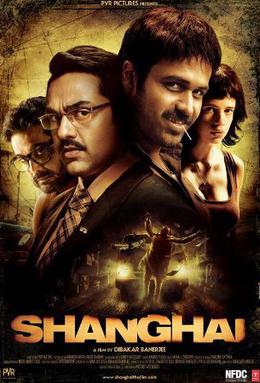 The title couldn’t be helped. It was too much out there. And therefore, the immediate retraction.

If you want to take the dedication seriously, then it is first advised that you take it completely. Don’t judge Shanghai with Costa Gavras’ Z. Read the book by Vassilis Vassilikos. And while I haven’t read the book, I have seen the movie. I am not comparing.

Because that is where the fun in Shanghai lies. Because the Greek establishment thoroughly differs/differed from the Indian establishment. To look for reference points beyond plot make the whole process moot. The pattern and structure followed here is so vastly different that if we go beyond just the movie to relocate Z in Shanghai, we shall miss out on something great, something gripping.

Because Shanghai is a wonderful film. Shanghai is a very powerful film. Shanghai delivers on more than just one level. The various aspects of authenticity, the nuances of film-making, the parts that go into making a film a great film, everything is intact and embellished in Shanghai. Well, mostly all of it — some flaws will always remain and points of perspective will always differ.

The timing of this movie could not have been more exact. Shuddering in the passage between two Indias, the movie works as a negotiator and a reflector. It builds on the salient realities of political existence and draws the reader out into the setting of the movie.

And while that is the power of narrative, a lot more is given to it by its vast range of very capable actors. The film does not pause anywhere, even in places where you wouldn’t mind hanging around. The chapters reel away, moving in flash pieces. Everything is so well-programmed that you are forced to become one with the characters. You can associate yourself with them. And that is where I believe lies the mastery of the film.

Using all the tools of realism and fiction at its disposal, director Dibakar Banerjee spins an interesting yarn. He tells the story in a very blunt narrative and when you’re doing a movie like Shanghai, no other approach could have worked better. The movie begins with a shrug, it sets the pieces on the board and the minute Prosenjit Chatterjee lands in Adarsh Nagar, the ball starts rolling. Flying all over the place even! The people earlier introduced get into their parts effortlessly and one by one, one by one, all the set pieces start to fall. You don’t realise it half the time, but the story has moved a thousand paces ahead. And don’t get me wrong. It’s not like the movie flies over your head either. It’s just that everything in Shanghai has it’s own reflex action. And the wonderful part of it all is that the reflex on screen is made to seemingly coordinate with the reflexes of the viewers.

By a long mile, Abhay Deol is once again a revelation. In a role that is a kind of firsts in more than one way, Abhay Deol portrays a wavering honest bureaucrat with alarming ease. His accent is pounded into mastery, his every action has a governmental stamp behind it — even the way he glances away from a file. From seeing Kalki and him in Dev D, to now, in Shanghai, Abhay Deol is a masterclass performance. He fills you with awe, he inspires you to be more.

It is an unspeakable joy to see Emraan Hashmi do more than just remixed versions of the same character he plays in his myriad Bhatt Camp movies. And then you realise that he is so much more talented than what he is made out to be. With the crooked teeth, the lecherous gait, the confused guilty mind, he plays them all out as the movie progresses, right till he becomes an integral part of it, ripping everything from inside and out.

Farooq Sheikh finds himself on the big screen after a long, long time and you cannot but wonder the loss that Indian cinema has incurred by leaving so talented a man out of its inner fold for so long. His performance was rust-free, it had an exciting spontaneity and he long seizes to be Farooq Sheikh to become Kaul. He engrosses you even with his absence. He lingers in your mind even during the movie.

In contrast, Kalki Koechlin is a bit of a let-down. Very clearly, she doesn’t fit in. And perhaps that was what the director wanted. The glaring debate left open in her character is whether she was in it for the love of socialist justice, or because of her growing affections for Prosenjit’s character. Which is why perhaps she can be out of place, forcing herself in to be a part of his world. But she still doesn’t make the cut. Not completely at least. Yes, she too has her moments. When she finally faces the driver who caused the “accident”, her lashing out and then her broken reaction to it is worth the price of your ticket alone!

Prosenjit Chatterjee, the principal cause of the whole movie, doesn’t have too long a part to play, but he has a convincing one to play, a role which needs more to be felt than seen. And he focusses that well through his entire persona on screen, right from appearance to his posture. Crucial in absentia.

The movie is wonderfully captured. Nikos Andritsakis does a marvellous job in getting the right grip on the tone and effect of the movie. And he is skilfully assisted by Namrata Rao, the editor. She lays the right cuts to Andritsakis’s stark frames to encompass the thriller genre, pausing and freeing the momentum at the right visual moments. Special mention must also be made of the background score in the film, Mikey McCleary being just the perfect harmony adjustment that the plot and screen needed. There is only one song and you don’t tend to pay much attention to that. All that you notice, and feel, is what plays in the background.

Now then, where are the flaws? They are in the overtly simple aspects of the movie. For instance, Adarsh Nagar? Really? And that jibe at the media’s priorities in the scene with Prosenjit and the ugly item number, little things like that go on to diminish the impact of the movie. Because suddenly you feel cheated, that the director did not think the viewer to be intelligent enough. The movie is well-guarded in the truth of it all, and clichés such as these put you off completely. But in spite of the flaws, watch the movie. It feels nice to see such movies coming from the Bollywood stable. It gives hope for a tomorrow that has also arrived.